Back to the overview

Participation in the ALPSTEIN CROSSING Hike&Fly Team Race is at the risk of each participant. By signing the conditions of participation on the day of the race, the participant expressly waives all claims of any kind arising from damage, injury or consequential damage.

The participating athlete is responsible for any kind of self-caused damage at any places, starting and landing areas. Property damage as well as personal injury in connection with the performance of ALPSTEIN CROSSING will not be covered by the organization and will be explicitly borne by the participating athlete.

The legal requirements of the Swiss Civil Aviation BAZL must be observed during the race. In the race office a currently valid glider card incl. of the applicable regulations from DABS/NOTAM with corresponding flight limitations and animal protection zones can be viewed. Explicit reference is made to the current situation before the race by means of an appropriate briefing.

Published pictures, videos or similar of the participating athletes, which were created during the event and published on social media platforms such as Facebook, Instagram, Twitter or similar, must have the reference “ALPSTEIN CROSSING” or #alpsteincrossing. Pictures and videos with the reference “ALPSTEIN CROSSING” or #alpsteincrossing may be used by the organizer on their platforms without permission from the owner.

The Race Committee reserves the right to make any changes to the Race Rules, but will proactively publish changes via the website.

ALPSTEIN CROSSING is a team event. A maximum of 120 participants, i.e. 40 teams, will be admitted to the race. Participation must be completed on the website https://www.alpstein-crossing.ch/registration and received by ALPSTEIN CROSSING no later than August 31, 2022. Registrations will be considered in chronological order. Registration for ALPSTEIN CROSSING can only be done via the corresponding website. Other channels such as phone, email or similar will not be allowed. The official registration is valid only after verification of the data as well as an official confirmation of the organizer.

The 10 first-place teams from the previous year automatically register for the next year. A new registration is not necessary. The teams will be informed accordingly.

A team must meet the number of 3 Team Members. Registration of a team of less or more than 3 members is not allowed. A team name of your choice must be defined for a team. Team name and team members must be entered in the team registration.

A team can withdraw from the race. Cancellation must be reported at any time to the race management or to registration@alpstein-crossing.ch. A cancellation can be made free of charge up to one month before the race. Starting fees cannot be refunded for withdrawals after July 31, 2022. The starting fees will then be charged to the team.

Only paraglider pilots who have a valid hang glider license are allowed to participate. All those who have reached the age of 18 are eligible to start. For younger participants (absolute minimum age is 16 years) a declaration of consent of the legal guardian(s) is necessary and must be presented at the latest when signing the conditions of participation or issuing the start number.

Unfortunately, student pilots will not be admitted to the race.

Each participant must have an insurance certificate (liability) with a guaranteed sum of at least. CHF 1,000,000.00 per damage event and must be presented on the day of the race at the latest when signing the conditions of participation or issuing the starting numbers.

Each participant must present the equipment to the race office for inspection before the start of the race. No start number will be issued without equipment check. All equipment must have subsequent seals of approval and be within the pilot’s appropriate weight range.

Each participant confirms that he/she is in good physical condition for the race by signing the conditions of participation on race day.

To participate in ALPSTEIN CROSSING the following conditions are necessary.

The organizer reserves the right to exclude registrations, admissions from the race on race day without giving any reason.

The race takes place in the Appenzeller Alpstein. The start and finish are in Weissbad Appenzell (Homebase). The complete race distance is about 50 km running distance and 30 km flying distance (as the crow flies). The following turnpoints and routes are to be completed as a team.

The turnpoints can be changed by the organizer until the race day resp. 24h before the race day can be changed. Turnpoints may be cancelled or relocated due to the current flight restriction and weather situation. The regular valid turnpoints for the ALPSTEIN CROSSING will be announced at the race briefing by the Race Director.

For the running routes the official roads, sidewalks, footpaths, hiking trails and pathsmust be used explicitly. The use of and compliance with the official and regular network of trails will be checked by the organizer during the race or controlled via the tracking system.

There is one (1) homebase (start and finish), and nine (9) turnpoints. In principle, a Turnpoint must be reached on foot from Homebase. From the turnpoint to the homebase is basically flown. Reached points for a turnpoint have to be brought back to homebase on a direct way. (sequential) A time stamp must be made on the turnpoint by the athlete. The team with the most points wins. In case of a tie, the faster team wins. In case of equal score and equal time, the race committee will decide. Only when the athlete has arrived at homebase and again a valid timestamp has been made at the finish line, the turnpoint is considered to be fulfilled and flows according the points into the scoring. Routes flown on foot as well as by paraglider will be scored with points. The table below shows the scoring of each section.

The race lasts 8 hours. So the team has 8 hours to collect as many points as possible.

If the athlete is not in the homebase at the end of the race, the current turnpoint is considered not fulfilled and no points are scored for it. Also, if the athlete has completed the timestamp on the turnpoint, the points for the run will be dropped.

The team can only win as a whole. The ALPSTEIN CROSSING race is a non-profit event and accordingly does not pay out any prize money. The team wins the recognition of the other teams and masses of fame and glory. 🙂 At the award ceremony the best 3 teams will be honored as well as the best individual score. Also the athlete with the least points after individual ranking will be specially honored. 🙂

Participation in the race is exclusively by human muscle power. For this reason, the use of any kind of equipment or outside assistance is prohibited and will be punished by disqualification.

At the starting places, consideration will be given to starting participants and help will be provided in case of starting difficulties!

An orienteering-like system from FixFinder will be used for timing during the race. Participants must use this. Each participant must install the appropriate app FixFinder on his smartphone. To use the FixFinder app, the participant must open a personal account. During the race, the app must be run constantly. The use of the app will be explained at the Race Briefing at the latest.

FixControl is also used for GPS tracking during the race. During the race, the app must be run constantly. The use of the app will be explained at the Race Briefing at the latest.

The athlete is of course allowed to use his own devices like GPS, vario, watch etc. for the race at his own discretion. 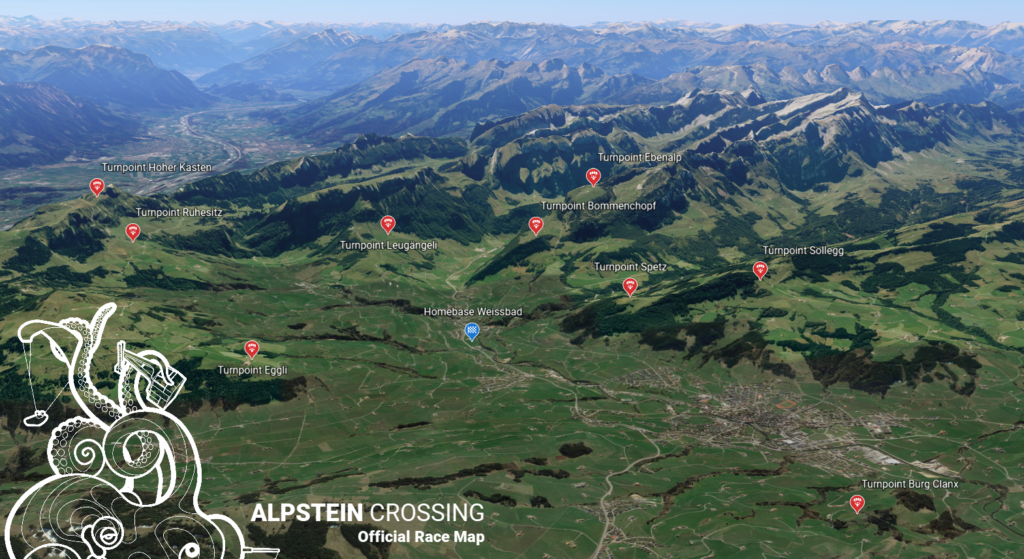